Is a Maltese right for your family?

Is a sweet-tempered Maltese on your family’s wish list as a new addition? Read on! We want to help you make an informed decision as to whether this particular dog would be a great fit for your family. Book in a consultation with your local Greencross Vets if you’d like to know more

The Maltese is one of the most ancient of the ‘toy breed’ dogs, tracing back at least two millennia. No one’s 100% sure where the Maltese originated from, but there are a couple of theories. Many people believe this pooch originated in Malta, just like the name – which makes sense, doesn’t it? Or perhaps, Melita, a town in Sicily. Both theories have been investigated and have some factual evidence behind them, but no-one can know for sure. What we do know is that their roots trace back to the Mediterranean area. It’s also believed that the Maltese dog was worshiped by the Ancient Egyptians. They believed they had the power of healing.

Although the Maltese is gentle, playful and small, don’t underestimate their size. They know how to stand up for themselves if they feel a threat. But mostly they’re just big softies. Believe it or not, they actually make pretty good watchdogs, giving the impression of being fierce to ward off strangers. Once they know a person is not a threat, they will jump up and lick them. They may like to play the tough guy act initially, but their real temperament will reveal itself soon enough. See your local Greencross Vets if you’d like to know more about the temperament of a Maltese.

The Maltese is a small, hardy dog with silky hair. Their average height is 21-25cms and they weigh between 3kg and 4kg. It’s often referred to as a ‘toy breed’ because they’re so small. Their coat is pure white, although some might have a touch of lemon. Their fur is naturally soft, silky and has a slight wave to it. They have a long tail which is held over the back with a graceful curve. Their ears fall very close to their face and can often blend in with their coat. Their appearance can change significantly depending on how you style their fur, and there’s often a lot of it.

The spirited Maltese is trusting and devoted to its family. Don’t over-pamper these little dogs as they could develop small dog syndrome where they can display behaviours such as acting timid, wilful, demanding or obsessive barking. Unlike some bigger dog breeds, Maltese don’t really need a backyard, and are happy to live indoors. They still like a good walk, but don’t require as much exercise as some bigger dogs. They love to play with toys, bounce about the place, or even just sit on the couch and watch a movie with you. Ask your local Greencross Vets if this breed would suit your family’s lifestyle. 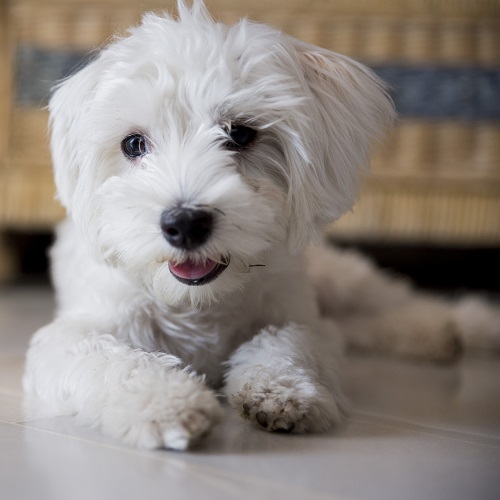 One of the main health issue with a Maltese is their teeth. They tend to get a build up of plaque and hence tartar on their teeth. Brushing their teeth daily is the best way of reducing plaque buildup. Some other common health issues Maltese may encounter include Heart Disease, Cushing’s Disease, Luxating Patella and Hypothyroidism. Regular trips to the vet and a well-balanced lifestyle should minimise these risks. Talk to your local Greencross Vets for more health information.

Because Maltese are known for their performance in the show ring, grooming possibilities are endless. Show dogs are referred to as a ‘full coat’. These show dogs require a lot of maintenance – about one hour a day on average actually! But your everyday Maltese family pet can sport many different looks because of their long, wavy fur. Some owners prefer the fluffier look. In that case, they require a weekly bath with a good quality shampoo and conditioner specially formulated for dogs, and a good blow dry afterwards. If this seems a little too high maintenance, you can always get them clipped at the salon. They might prefer a shorter ‘do’ for the summer and wavy locks for the winter.