Can My Pet Have Too Many Treats? 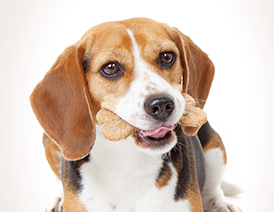 Our pets’ little bodies aren’t used to being overloaded with treats. Greencross Vets do not recommend changing habits too much during the holidays; just because you’re eating more, doesn’t mean your pet should eat more. Don’t give them anything that they’re not used to having. Stick to small quantities of nutritious treats that are made for pets. Little damage will occur by feeding a small amount of leftover chicken or turkey, but you should avoid feeding them  foods they’ve not had before.

We see a lot of  health problems post-Christmas, such as upset stomachs, vomiting, pancreatitis and problems with cooked bones. It’s best to prevent these kinds of problems!

How much is too much?

People know their own pets, and know if they have sensitive bellies, but Greencross Vets recommends not changing their routine because it’s a holiday – your pets don’t know it’s a holiday and by spoiling them you may cause problems. A little extra isn’t generally an issue, but when you have family and friends over, everyone likes to give them a little bit and that adds up quickly.

What are the symptoms of overfeeding?

Symptoms of overfeeding include vomiting, nausea, sore or rumbling bellies, not wanting to eat their next meal, being a bit funny the next day or on their walk, not wanting to exercise and sleeping more than usual. We often return them into their normal routine again the day after the holiday but they will probably be tired from all the festivities, and these symptoms mean they’re trying to let everything settle back down. If they’re going off food, vomiting, changing in their overall demeanour, it is a good indicator that something is going on and they should be seen by your local Greencross Vets team.

What if I notice this in my pet?

If you are worried your pet may have overindulged and is displaying some or all of the above symptoms, please don’t hesitate to contact your local Greencross Vets. Don’t tempt them with tasty treats to get them to eat because that’s part of the problem in the first place – they will eat that food and it could make things worse. If they’re vomiting they definitely need to be seen by a vet because they can become dehydrated quickly, amongst other issues. Regrettably, some pet owners often wait two or three days before seeing the vet, because they know their pet has been overfed and they think it’ll settle down. However that’s when things tend to deteriorate and your pet needs to be seen and treated earlier.

If you notice strange symptoms in your pet, it’s best to visit your nearest Greencross Vets for professional advice.

Treats Not So Sweet For Pets