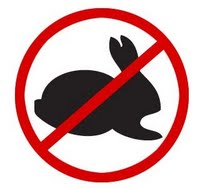 While Easter bunnies – especially the chocolate kind – may be cute and tempting, rabbits in the real world don’t always have such a good reputation and for good reason.

The wild rabbit is now considered to be a pest in Australia and in states such as Queensland, keeping a rabbit as a domestic pet is illegal (although rabbits may be kept as pets in New South Wales and Victoria).

According to the Department of Primary Industries and Fisheries Queensland (DPIFQ), the maximum penalty for keeping a rabbit as a domestic pet is now $30,000.

So why are these small fluffy animals held in such dislike?

Originally imported from Europe and the UK to Australia in 1859 and spreading rapidly across the country to number into the many millions, the DPIFQ describes rabbits as “Australia’s most destructive agricultural and environmental introduced animal pest”.

Due to their particularly swift and extensive breeding habits as well as their love of digging burrows and eating grass, it’s estimated that rabbits cost between $600 million and $1 billion annually in severe land degradation and soil erosion.  This land damage also threatens Australia’s native wildlife as well as our farmers and graziers’ livelihood.

As an official pest under the Land Protection (Pest and Stock Route Management) Act 2002, Queensland vets are also required to report any rabbits brought to their clinic to the DPIFQ.

So while Easter remains a perfect time to munch on a chocolate bunny, be aware that its furry counterpart isn’t always welcome in our homes or on our land.

Treats Not So Sweet For Pets
Undefined