Is a Jack Russell right for your family?

Your dog is an important member of the family. Every breed has something different to offer and they all come with a different set of instructions. That’s why we’re here to help you make an informed decision as to which one is right for you. Book in a consultation with your local Greencross Vets if you’d like to know more.

Did you know that the Jack Russell Terrier was initially bred to hunt foxes? The Terrier was named after Reverend John Russell. He bred Terriers to aid in fox hunting in Devonshire, England during the mid-to-late 1800s. Legend has it that he acquired his first Terrier, ‘Trump’, from a milkman around 1816. He wanted to breed very specific characteristics in the Terrier. He was said to be so particular, that he only bred entirely white Terriers, or white with colour confined only to their head and a small patch at the root of the tail. The ANKC (Australian National Kennel Council) officially recognised the Jack Russell Terrier in 1991, although it has been in Australia since the ‘60s.

The energetic and cheeky Jack Russell loves to move around and you’d be impressed with how they jump and hop from spot to spot. And believe it or not, they don’t grow out of it. They keep active through to their old age. They’ll pick up on tricks too, so they can be fun to train and have a good old game of roll-over, shake and high-five. Because they’re originally hunters, they have a fearless nature. They know what they want and won’t stop until they have it. Despite their small size, they make good guard dogs as they won’t hide in a corner if they sense danger. They’re also fantastic diggers and are known for being great escape artists, so secure fencing is important for owners. Their hunter-like nature gives them courage and they’ll never back away from a challenge. See your local Greencross Vets if you’d like to know more about a Jack Russell’s temperament.

The Jack Russell is a small athletic dog, full of vitality. Primarily white with black and/or tan patches, their coat comes in three different textures – smooth, broken or rough. But it’s always thick and waterproof. Size-wise, they’re slightly longer than their height at the shoulders – around 33-35cm. Their V-shaped ears fold forward and teeth meet in a scissor bite. Because of their hunting history their chests should be small (so they can fit into brooks, chasing their prey!).

This active pooch is a perfect family dog, especially if you have kids over the age of three or four. They have an adventurous nature so it’s best if you have an adventurous side too. Jack Russells do tend to get bored, so it’s best if they have a family that can really give them the time of day. A solitary or sedate lifestyle isn’t suited to the Jack Russell. Too little exercise, companionship and mental stimulation will lead to boredom… and when they get bored they tend to amuse themselves by digging or making a mess. It’s important to have a backyard for them to run, play, hunt and let off some steam. Ask your local Greencross Vets if this breed would suit your family’s lifestyle.

Luckily, there are few health and genetic issues with the Jack Russell. They’re considered extremely hardy and most injuries are usually self-inflicted. Some issues they may encounter though are skin allergies, Luxating Patella, Progressive Retinal Atrophy, Von Willebrand Disease and Legg Calve Perthes Disease. Regular check-ups and a healthy lifestyle will minimise these risks. Talk to your local Greencross Vets for more health information. 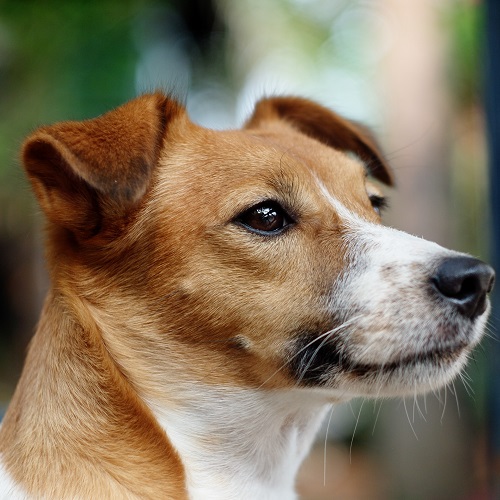 The Jack Russell is a relatively low-maintenance dog when it comes to their beauty routine. But they do tend to shed their fur, no matter what coat type: smooth, broken or rough. Just give them a weekly brush or as needed to keep those flyaways away. They may not need regular baths, they tend to keep themselves pretty clean, unless of course they get adventurous and go for a swim in a muddy river. Just like people, they do need their teeth brushed on a daily basis in order to provide and promote good gum health. You never know who they might meet at the dog park, so keep that breath minty fresh.