Wondering if a Dachshund is right for your family? Learn about the Dachshund’s personality, health and care requirements from Greencross Vets today. Topics Covered:

A Brief History of Dachshunds

The Dachshund, colloquially known as Sausage Dogs, originated in Germany as a hunting dog. Their origins can be traced as far back as the 15th century, though the recognised development really began in the 17th century. Their name translates to “badger dogs”, which is exactly what Dachshunds were bred to do, hunt badgers.

Their characteristics such as short legs, loose skin, big chests, and determined temperament made them ideal for digging, entering tunnels, and most importantly, fighting badgers.

The breed didn’t increase in popularity until the 1930s and 1940s, after becoming a recognised breed by the American Kennel Club in 1885. Dachshunds continue to be a very popular dog breed to this day.

However, the Dachshund we know and love today looks quite different to how they used to in their hunting days. They have a longer face and body, slightly wider chest, and much shorter hind legs than their ancestors.

Dachshunds themselves are believed to have originally been bred from dwarf mutations of taller hunting hounds like the Bloodhound and the German Pinscher. It was desirable for hunters to gradually shorten their legs through selective breeding in an attempt to create the perfect breed for going down holes to look for badgers and rabbits. 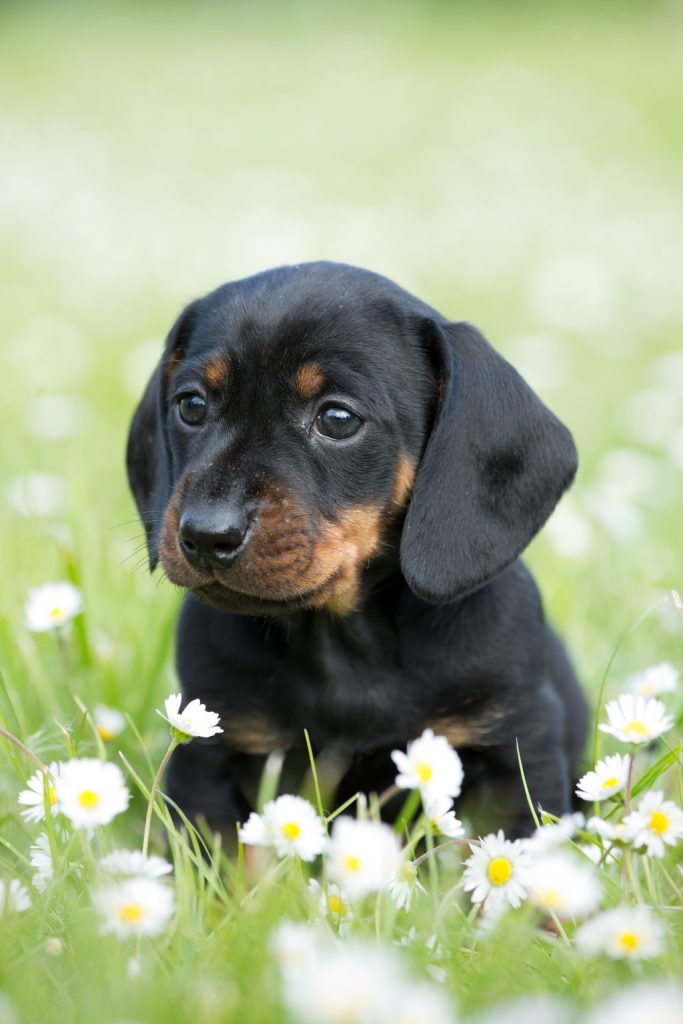 Dachshunds are first and foremost known for their incredible loyalty alongside their courageous nature, giving them the bravery to take on animals much larger than themselves. For both of these reasons it means they can be aggressive towards strangers and other dogs.

They are also described as clever, lively, and bred for great perseverance, which can translate to stubbornness. They can be highly affectionate and desire physical contact with their owners, which for many outweighs their stubborn and rash characteristics.

Different personality traits have also been documented between the different coat variations of Dachshunds. It has been observed that long-coat Dachshunds are noticeably calmer than their smooth-coat counterparts, and wire-coat variations portray a more outgoing and playful personality due to their terrier background.

Since they were originally bred as hunters, they have a tendency to dig, ranking them higher than other breeds for displaying destructive behaviours. Their hunting dog heritage also means they have a stubborn streak, necessary at the time for perseverance in following scents and chasing down badgers. Dachshunds are known for being one of the most stubborn dog breeds, making them more of a challenge to train.

Though potentially difficult, properly training your Dachshund is completely possible with dedication, consistency, and patience. They will respond best to consistent, positive reinforcement training, with the main factor being repetition. They will usually respond well to food-based rewards during training, since they are highly food driven and have been bred over centuries to produce a predatory response to the smell and sound of food. 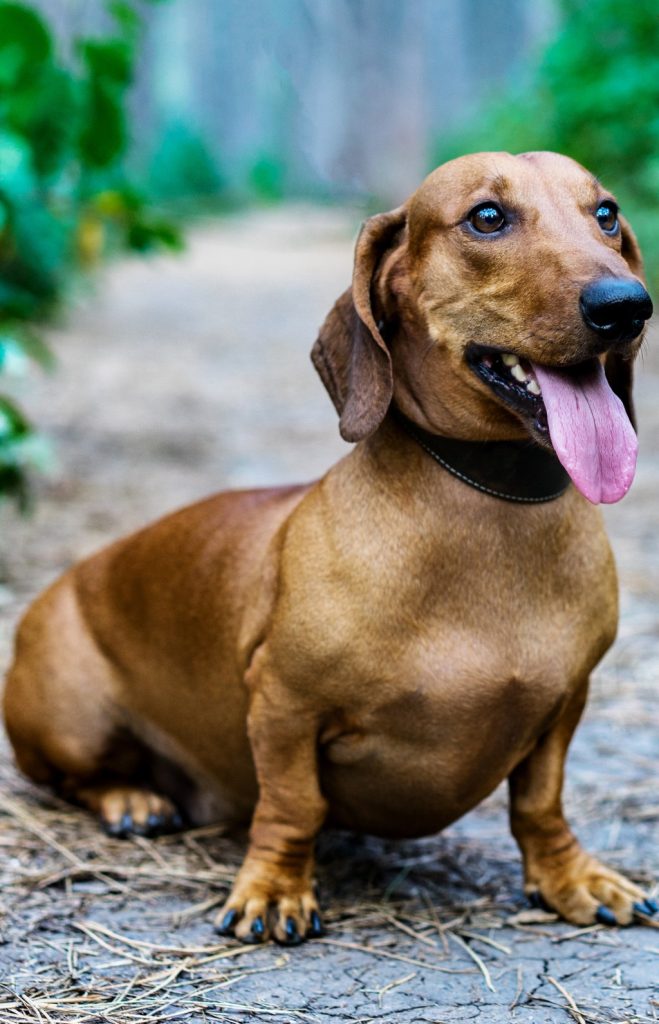 Dachshunds are bred with the chondrodysplasia (dwarfism) gene, which means it takes longer for their legs to fully develop. Once they are born they will grow rapidly for the first 8 months as the bones in their legs get longer, they will keep developing until the growth plates close up at 10-12 months. This means Dachshunds will typically reach their full height at 1 year of age. They will however continue to put on weight until reaching their adult weight, this can continue for as long as 18 months to 2 years. 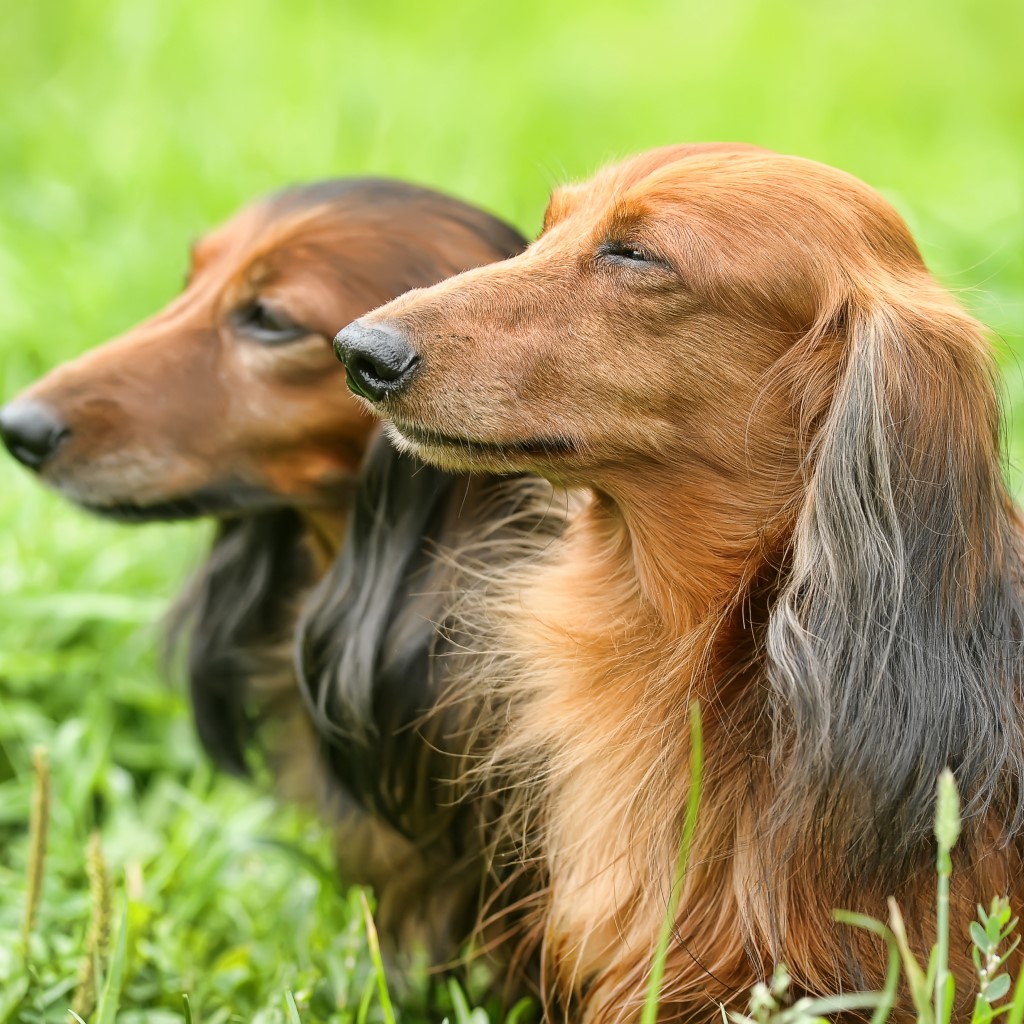 Approximately 25% of Dachshunds suffer from back problems (like Intervertebral Disc Disease) due to their short legs. They can also suffer from a number of problems with their eyes, joints, thyroid, hips, knees, weight and skin. Some of the most common conditions to look out for include:

Intervertebral Disc Disease (IVDD): due to their dwarfism trait and short leggedness their backs are incredibly fragile. IVDD is when a disc between the vertebrate in the spinal column deteriorates and calcifies making it vulnerable to bursting with any jarring movement. Suspicions of back problems in a Dachshund requires immediate veterinary attention.

Patella Luxation: this occurs when the kneecap pops out from its groove, this is more common in Dachshunds due to their short legs that have changed the angle of their kneecap. This can be treated surgically after a physical examination by a qualified vet.

Hip Dysplasia: this is caused by a deformity of the hip joint causing the thigh bone to not fit properly into its socket, leading to lameness in the rear legs.

Obesity: Dachshunds are genetically prone to obesity, which can put extra pressure on their spine and further increase the likelihood of back problems. Low impact exercise and a closely monitored diet is necessary to keep them at a healthy weight.

Seizures: Dachshunds have a genetic predisposition to epilepsy and are prone to idiopathic epilepsy, meaning there is no known cause for their seizures.

How to Care for Your Dachshund

Dachshunds can display a lot of stamina and energy, so they enjoy walks or playing outside with other dogs. They can be suited to small living quarters or apartment living so long as they get a moderate amount of daily exercise. This can consist of a couple of 10-minute walks per day or games of fetch inside the home. To prevent destructive behaviours, Dachshunds require both daily exercise and mental stimulation to prevent boredom and frustration.

Dachshunds are typically not suited to living outside or in a kennel but are instead indoor dogs. Since they are prone to back problems they should not jump on and off furniture as it increases their chance of injury. It is best to get a ramp or small steps leading to furniture, so they do not have to jar their legs or back.

Dachshunds require company and don’t like being left alone, this desire for companionship can often be satisfied with a second pet. If you are able to play with your Dachshund and give them plenty of attention, they will be fine as an only dog, however if you are not going to be able to provide them with the companionship they need, it’s best to reconsider if this breed is right for your family or discuss with your vet about whether getting another pet for companionship will help.

Typically, Dachshunds shouldn’t be left a home by themselves for large extended periods of time, as pack animals they get bored, lonely, and stressed on their own.

The quantity of food your Dachshund requires depends on their size, age, build, metabolism, and activity level. Each food contains different calories and as such please refer to the back of the packet for the correct amount of food per body weight of your dog.

Feeding dachshunds human food should be avoided as it increases their risk of obesity. They should instead be fed a high-quality food since the higher the quality of their food, the less quantity they will require for proper nourishment. Dog treats can be given as training rewards or on special occasions, however care should be taken not to over-feed treats as they can often lead to excess weight gain. Speak with your local vet team to discuss appropriate food for your pet.

While they are still a puppy it is advisable to feed them special puppy designed food. The Petbarn Food Finder is a great tool to discover which puppy food options are available. Explore the options available and discuss with your local vet team the best nutrition choice for your pup. 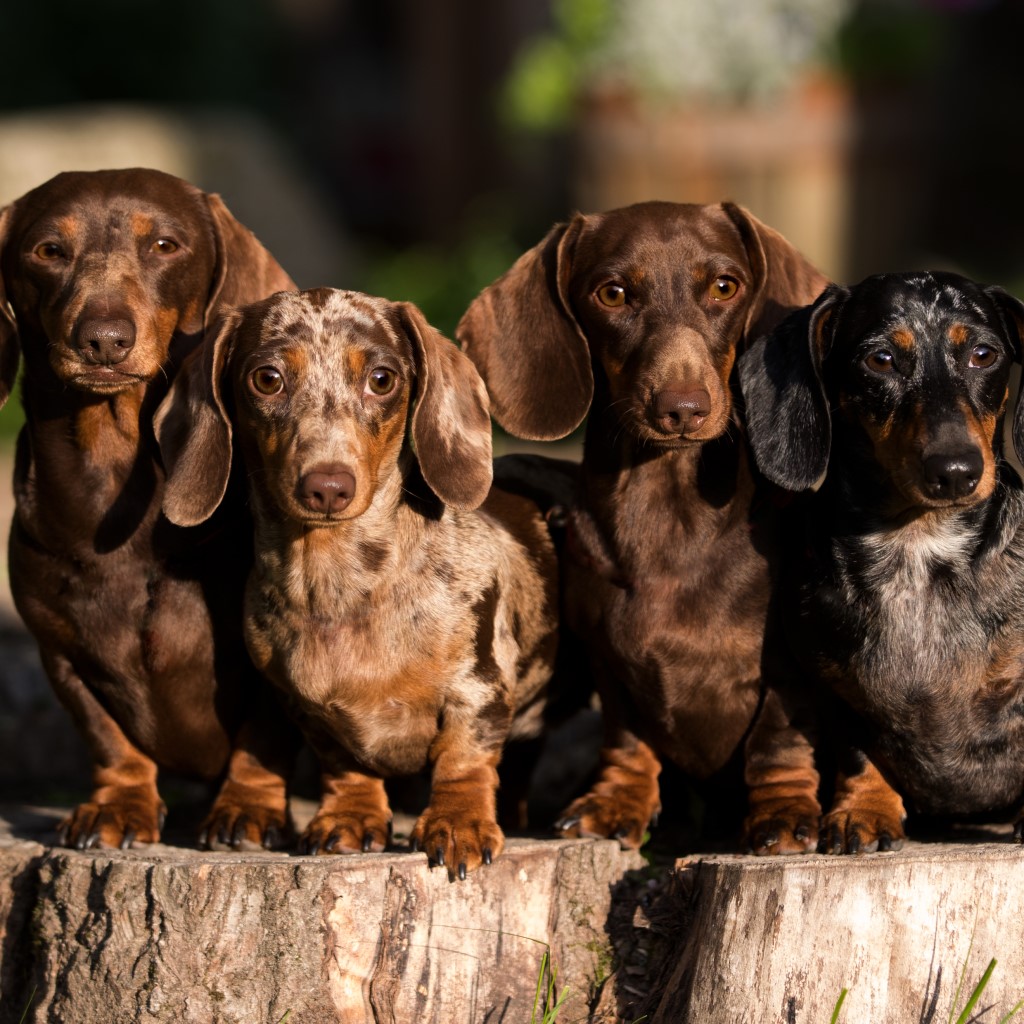 Dachshunds come in a variety of colours including red, cream, black and tan, black and cream, chocolate and tan, chocolate and cream, blue, and Isabella. They can also have dapple, brindle, sable or piebald coat patterns. They are also bred with three varieties of coat: smooth, wirehaired, and longhaired. Light coloured Dachshunds usually have green, light brown, or amber eyes, and can even have eyes of two different colours. Blue eyes are also possible for dapple Dachshunds.

Dachshunds are considered to be a low-maintenance breed when it comes to grooming. They shed minimally and do not need to be bathed often. Dachshunds with a smooth coat can be wiped down with a damp cloth between baths to keep them clean. Wirehaired Dachshunds however require regular brushing and will need to have their coat “stripped” two to three times per year. Longhaired Dachshunds also require regular brushing to prevent knots from forming and need to be bathed more often than other breed variations.

Since Dachshunds have ‘droopy’ ears, they should be monitored closely for any signs of irritation, redness, smelliness or infection. Droopy ears can be prone to fungal, bacterial or mite infections. If you think your pet has an ear issue, check with the vet team first for advice before cleaning their ears. Other grooming needs include nail trimming once or twice a month, and tooth brushing aimed for daily (just like us), to remove tartar and bacteria. 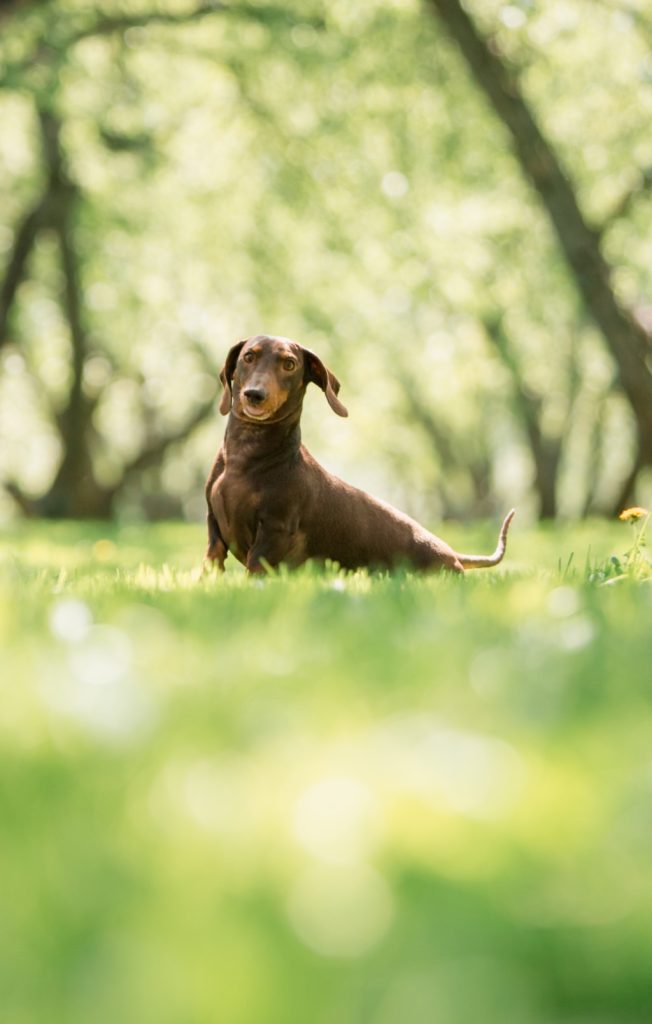 Living with Children and Other Pets

As family dogs, dachshunds are loyal companions, good watchdogs, and are good with children if treated well. Regardless of the breed of dog, we strongly recommend supervising all interactions with children and pets. They also love companionship so are typically very good with other pets within their own family. They are however a fiercely jealous breed due to their incredible loyalty which can manifest as aggressiveness and possessiveness over what they value and consider their property. This can be avoided by sharing your attention evenly between all pets and ensuring your Dachshund feels secure and loved. If you are concerned about your pet’s behaviour, contact your vet for training tips and further advice. 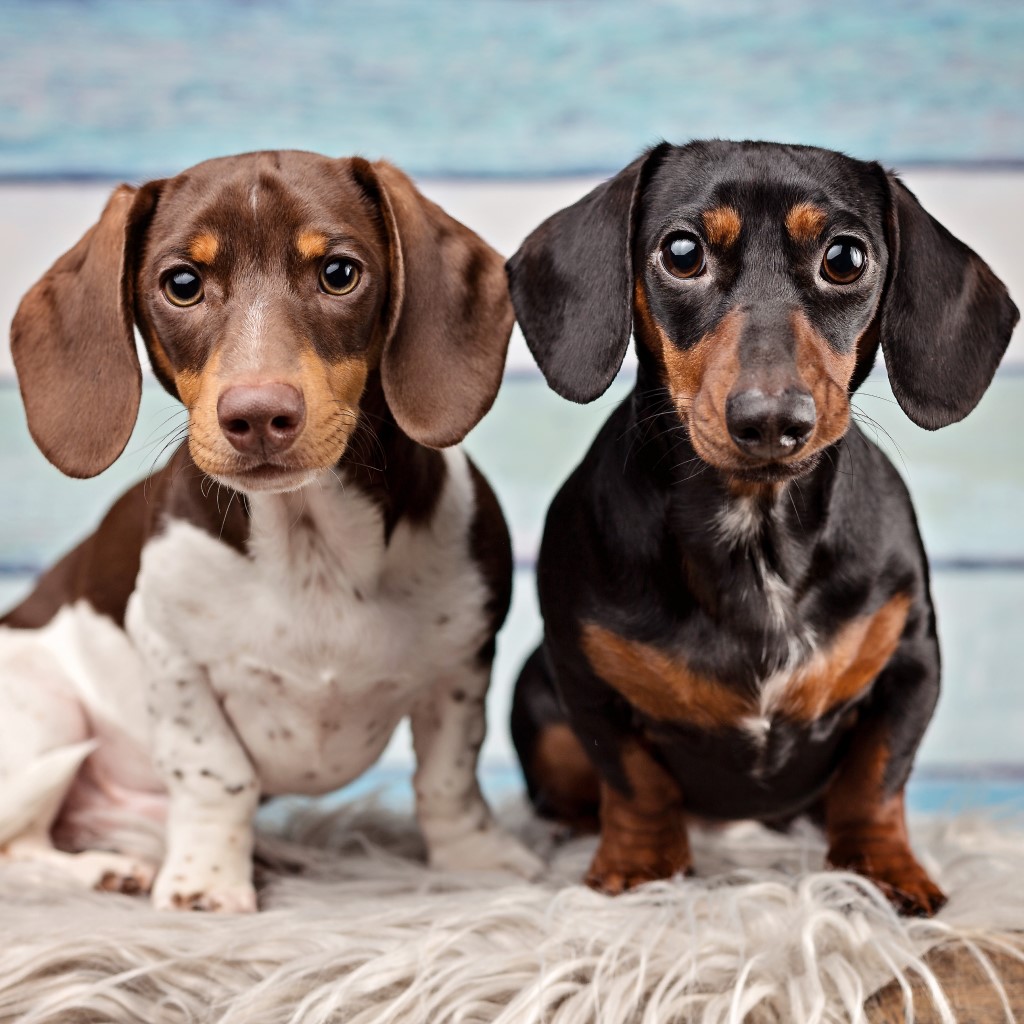 What should a Dachshund weigh?

Miniature Dachshunds tend to weigh up to 5kg while standard variations on the other hand will weigh between 7 to 15kgs.

What were Dachshunds bred for?

Dachshunds were originally bred as hunting dogs, primarily for the hunting of burrowing animals such as badgers and rabbits.

When does a long-haired Dachshund get its full coat?

It will usually take 18 months to 2 years for a long-haired Dachshund to come into full coat.

When are Dachshund puppies full grown?

Dachshund puppies will typically reach their fully grown height at 1 year of age, while they will continue to fill out to their adult weight up until 2 years of age.

Why does my Dachshund bark so much?

Dachshunds bark so much due to their breeding as hunting dogs, where they would bark to alert hunters that they found their prey. Nowadays, Dachshunds bark for a number of different reasons including frustration, boredom, excitement, excess energy, separation anxiety, territorial tendencies, and trying to get your attention.

Where are Dachshunds from?

Dachshunds are originally from Germany where they were bred as hunting dogs.

How long do Dachshunds live for?

Dachshunds have a relatively long lifespan of between 12 and 16 years depending on their health.

How many puppies do Dachshunds have?

A Dachshund litter will usually consist of between one and six puppies.

How many sizes of Dachshunds are there?

There are two sizes of Dachshunds, standard and miniature, with the main difference being that miniature Dachshunds are noticeably smaller than standard variations.

Dachshunds are very loyal and affectionate, meaning they love to cuddle on the couch, sleep in the same bed as their owner, and follow their owner around the house.

Do Dachshunds get attached to one person?

Dachshunds are a loyal breed and will often attach themselves intensely to one person, this is usually the person who feeds them or spends the most time with them.

We are more than happy to help! Or if you’re looking to adopt, find your new best friend with Petbarn adoptions.