Wondering if a Pomeranian is right for your family? Learn about the Pomeranian’s personality, health and care requirements from Greencross Vets today. Topics Covered:

A Brief History of Pomeranians

Pomeranians are believed to have originally been Arctic work dogs, with their name being derived from “Pomerania”, a region found along the Baltic Sea. Originally Pomeranians were bred to be working dogs that were relied on for guarding homes, pulling sledges and protecting livestock.

The Pomeranian we know today developed further in England, where their miniaturisation can be attributed to the British Royal Family. Queen Victoria owned a particularly small Pomeranian that she chose to breed. She was able to shrink the Pomeranian’s size by half during her reign. Pomeranians were commonly owned by nobles, with a Pomeranian even being one of the three dogs that survived the RMS Titanic!

The popularity of this breed continued to rise through the centuries, until it became a registered breed in 1898. It is now a popular breed with characteristics that have taken after its long and rich history. 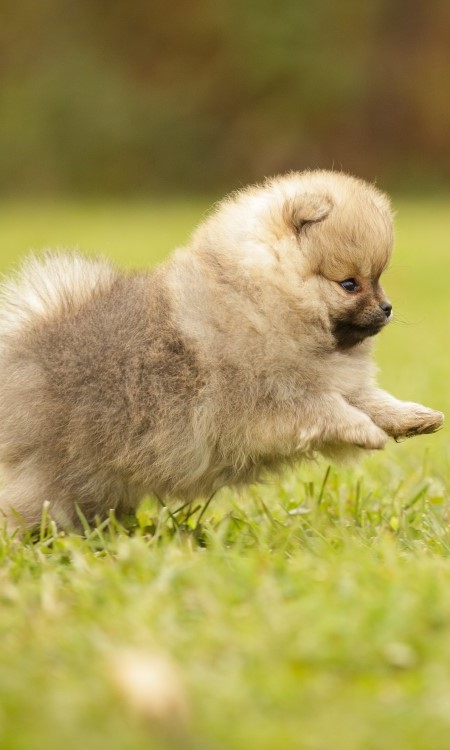 Though every individual dog is different with a unique personality, Pomeranians are generally perky, friendly little pets. Despite their small stature, they have no qualms occasionally being forthright with larger dogs if they are not properly trained and socialised. They are also a highly intelligent breed which means they do well in obedience competitions – despite the possibility of an independent streak.

Pomeranians are very alert which means they can make good alarm dogs and can be prone to excessive barking. They require plenty of training to help ensure good behaviour, but they enjoy and respond well to mental stimulation. They can be stubborn, bold, tenacious and high-spirited meaning training requires the use of positive, productive, reinforced training that harnesses their intelligence.

Pomeranians are extroverted and thrive with companionship. They find it incredibly simple to build a platonic, harmonious bond with other pets and their human family. 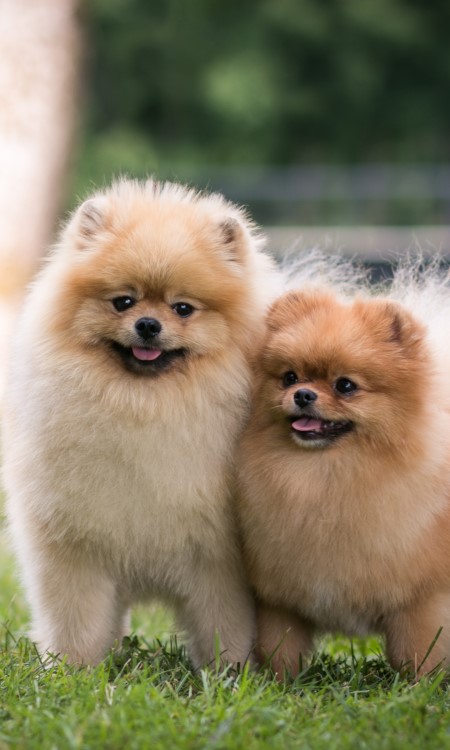 The Pomeranian dog breed is classified as a toy, meaning they are a small dog. At birth most Pomeranians are tiny enough to fit into your palm, weighing less than a kilogram. This does not last very long as Pomeranians will double their size in just a few days and will grow rapidly until they reach their full size. Pomeranians are typically 18 to 30 centimetres tall and weigh 1 to 4 kilograms when fully grown. 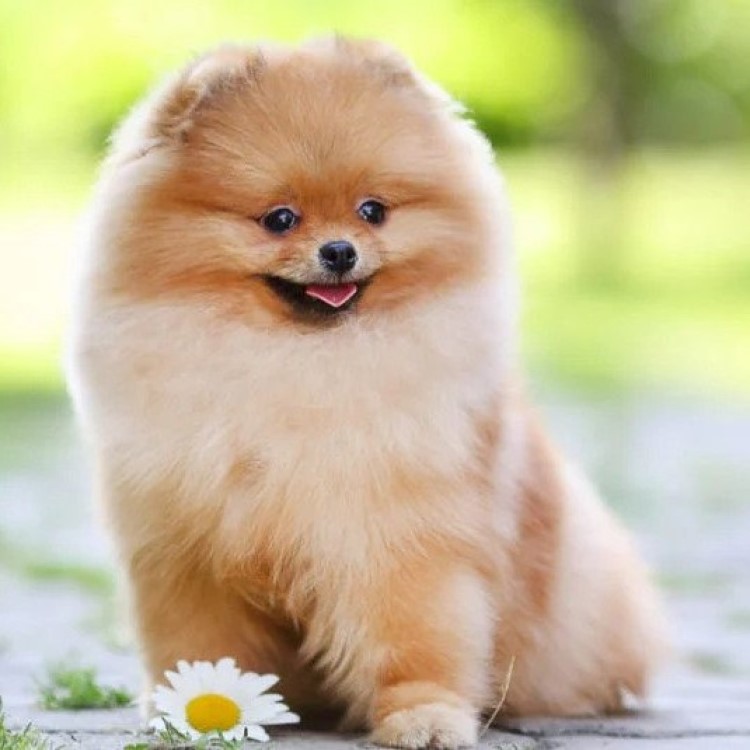 Pomeranians are typically very healthy and are a long-living breed of dog. Just like all dog breeds, they are prone to some health problems. One of the most prevalent health issues with Pomeranians is obesity. Because of their small size they don’t require much food, making it very easy to accidentally overfeed them.

Some common health conditions faced by Pomeranians are:

How to Care for Your Pomeranian

Pomeranians are active and therefore do require moderate exercise. Due to their small size, they can be sufficiently exercised with indoor play and short walks. This means Pomeranians are content in the city, as well as the suburbs, and are well suited for apartment living. Pomeranians are social dogs and thrive with the companionship of their family. Despite being social dogs, they can handle some time on their own, with adequate training. They should be able to be left alone for 6-8 hours during the day. Pomeranians require plenty of mental stimulation in this time to maintain their social nature and keep them from getting bored.

Pomeranians thrive on a diet of high-quality dog food with plenty of protein, whether it is commercially manufactured, or home prepared as part of a vet approved diet plan.

Pomeranians can be prone to becoming overweight, so it is important to monitor their dietary intake and weight. The amount of food given to a Pomeranian depends on the age, size, metabolism, and activity level of the pet. It is best to feed at least two meals per day. Speak with your local vet team to discuss appropriate food for your pet.

As a puppy it is important to feed a diet specifically for puppies. This helps meet the different nutritional needs for a quickly growing puppy. The Petbarn Food Finder is a great tool to discover which puppy food options are available. Explore the options available and discuss with your local vet team the best nutrition choice for your pup. 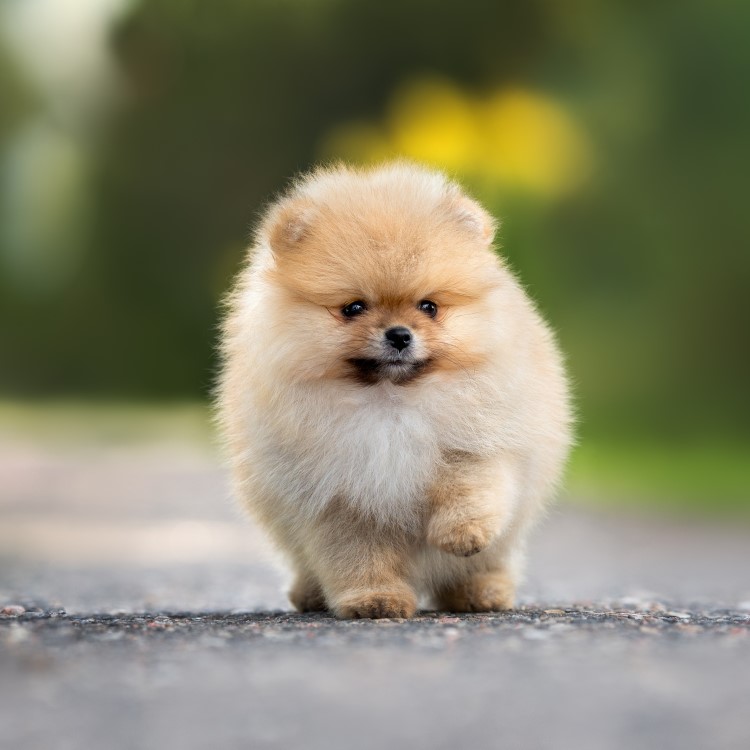 One of the Pomeranian’s most distinguishing features is their fluffy profuse double coat. Frequent brushing is necessary to maintain their beautiful coat. This involves brushing through both with a pin brush and a slicker brush 2 to 3 times a week to prevent the coat from matting.

Pomeranians shed excessively twice a year as part of a seasonal routine, as well as some consistent year-round shedding.

It is recommended they receive a full groom including a bath, brushing and nail clipping, every four to six weeks.

Pomeranians will shed their puppy coat and grow adult coats between four and eight months of age, sometimes growing a different coloured coat. 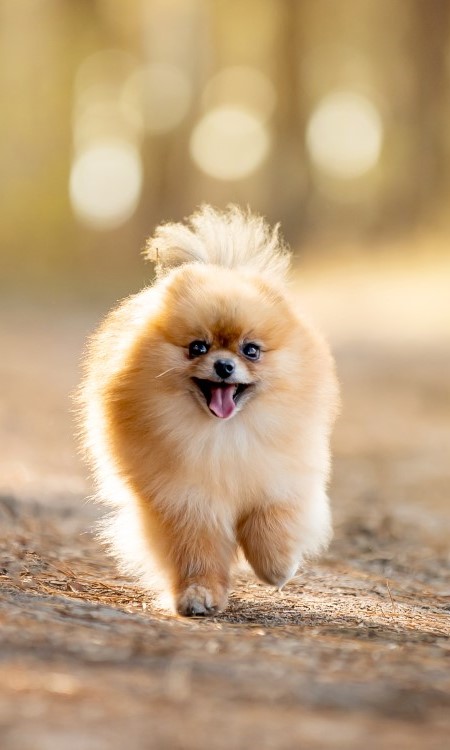 Living with Children and Other Pets

Pomeranians generally get along well with other pets, though they should be cautiously be mixed with larger breeds that may injure a toy dog accidentally. Pomeranians certainly have the personality of a big dog, so they may not realise they are not picking on someone their own size!

If they are raised around children they do quite well as family pets, however they can be a bit nippy. It is also important they are only around children old enough to understand they are not a toy, as they are not a sturdy breed. As with all breeds of dogs, children should never be left alone with the dog. Supervision is always required. 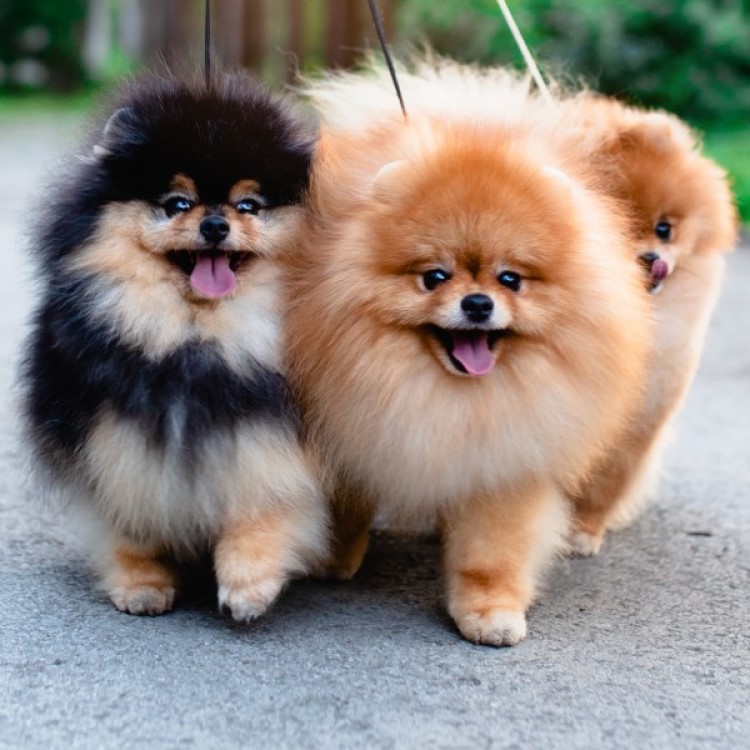 How long do Pomeranians live for?

With a good diet and appropriate exercise Pomeranians are generally healthy dogs and will live between 12 and 16 years.

How much should a Pomeranian weigh?

Pomeranians often weigh between 1.9kgs and 3.5kgs, though some litters can have puppies that are larger and grow up to weigh 6kgs.

How big do Pomeranians grow?

Pomeranians are considered to be small dogs that grow to be 20-36cms tall.

Can Pomeranians be left alone?

Provided they are left with all necessary supplies to spend their day mentally and physically stimulated, Pomeranians are able to be left alone during the day.

Do Pomeranians have separation anxiety?

Pomeranians can develop separation anxiety if they are left alone for too long or without proper stimulation which can lead to excessive barking.

Do Pomeranians bite a lot?

It is not common for Pomeranians to bite excessively out of aggression; however, they can form a habit of play “nipping” when they are a puppy. If they are not properly trained, then they may continue this biting and nipping behaviour.

Pomeranians do shed and leave hair around their environment; however, they are not considered “heavy” shedders.

Are Pomeranians a good family dog?

Pomeranians tend to be good with children and are generally friendly dogs. Though due to their small size, children need to be cautioned they are not as sturdy as larger dog breeds and need to be played with gently.

We are more than happy to help! Or if you’re looking to adopt, find your new best friend with Petbarn adoptions.